Sunday was my birthday, and as a present to myself I purchased a domain and hosting for promisingly penny-wise! I'm now at http://www.promisinglypennywise.com.
Posted by Rachael at 3:32 PM No comments: 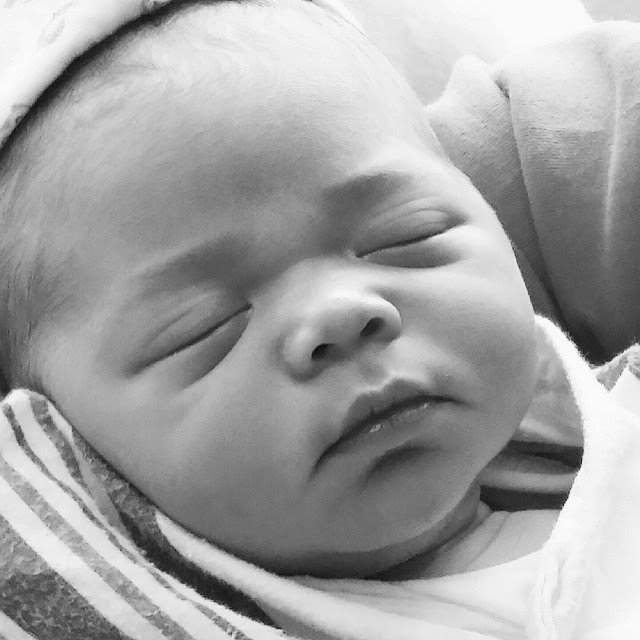 Baby G and me after she was dressed for the hospital photographers. 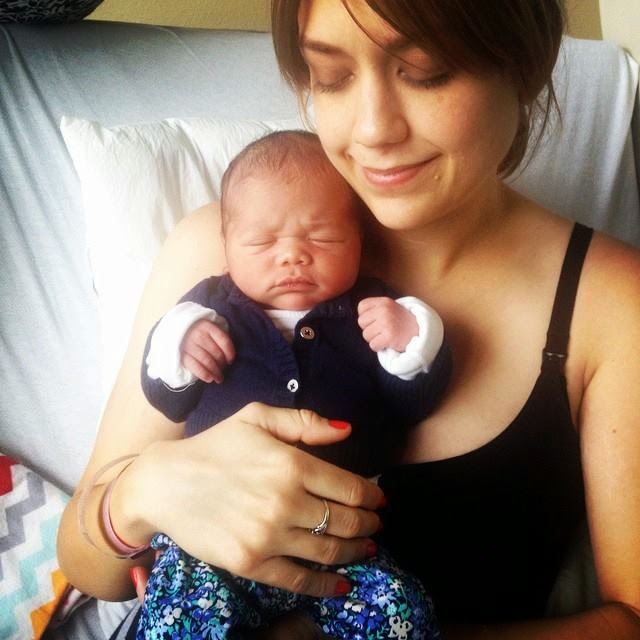 Baby G, Gary and me 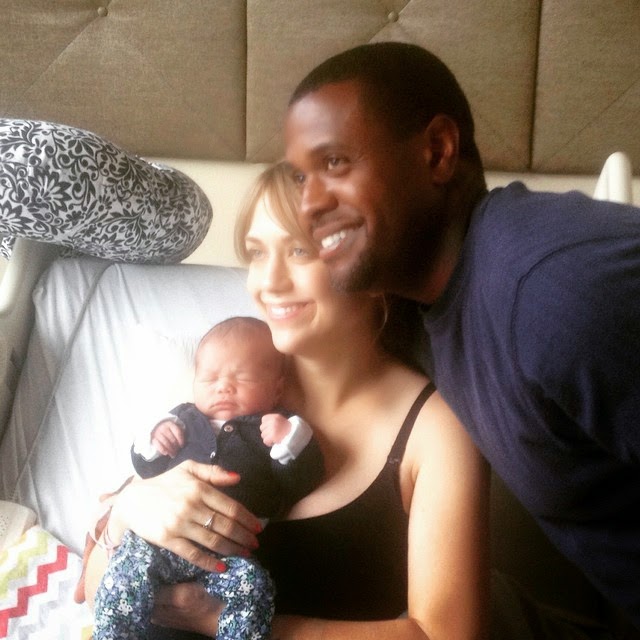 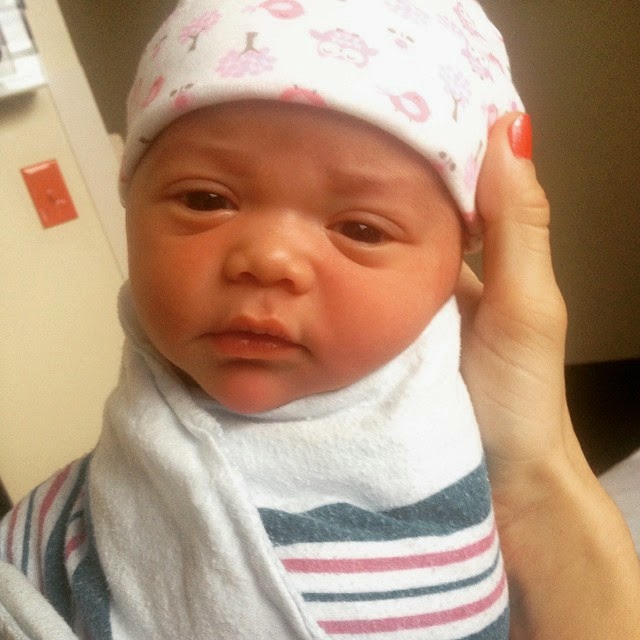 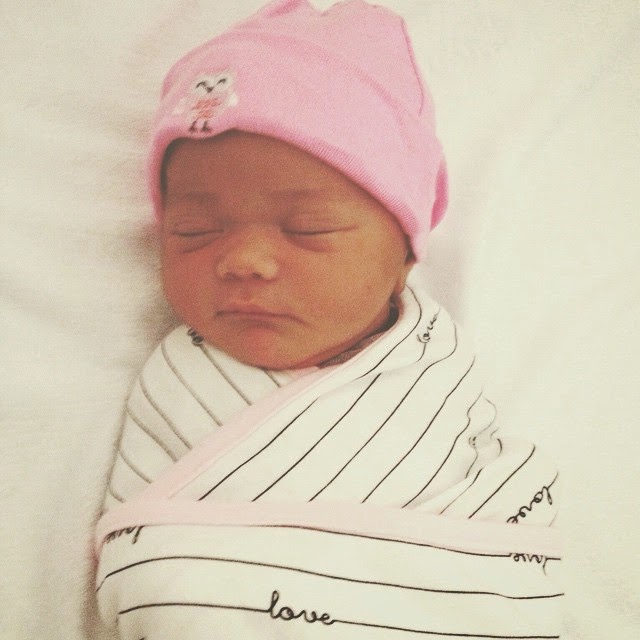 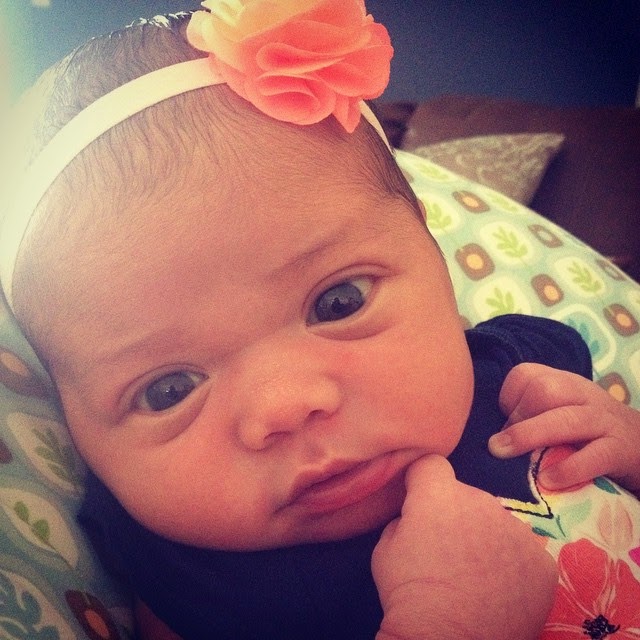 We are so in love. Baby G was due on the 7th, but arrived on April 11th. We had an induction set for the 13th, but I had really hoped to go into labor on my own to avoid being induced with Pitocin. Everything went better than I could have hoped!
I am so in awe that God chose us to be the parents of this sweet baby girl and so so thankful!

Posted by Rachael at 5:34 PM No comments:

Ways to Induce Labor at Home (according to fitpregnancy.com):

We've tried several of these methods, though no castor oil, herbs or acupuncture. I've also tried bouncing/rocking on an exercise ball.  Yep, none of them have worked so far. I think if your body is ready, some of them could potentially work. I also think some of the "surefire ways to induce labor" just happen to have been tried by desperate pregnant women who were about to go into labor anyway.

Philips Phile Surefire Birth Recipe
My husband is a big fan of the Philips Phile talk radio show, but believe it or not, this "surefire labor inducing" recipe was actually suggested by three people we know before we stumbled upon it online. I think if this recipe has ever been effective, it's been either coincidence or because eating so much of this stuff had the same effect as drinking castor oil. But, it has been years since I've had Kraft Macaroni and Cheese (a once a beloved childhood meal time staple), so when Gary suggested it I figured why not try it? 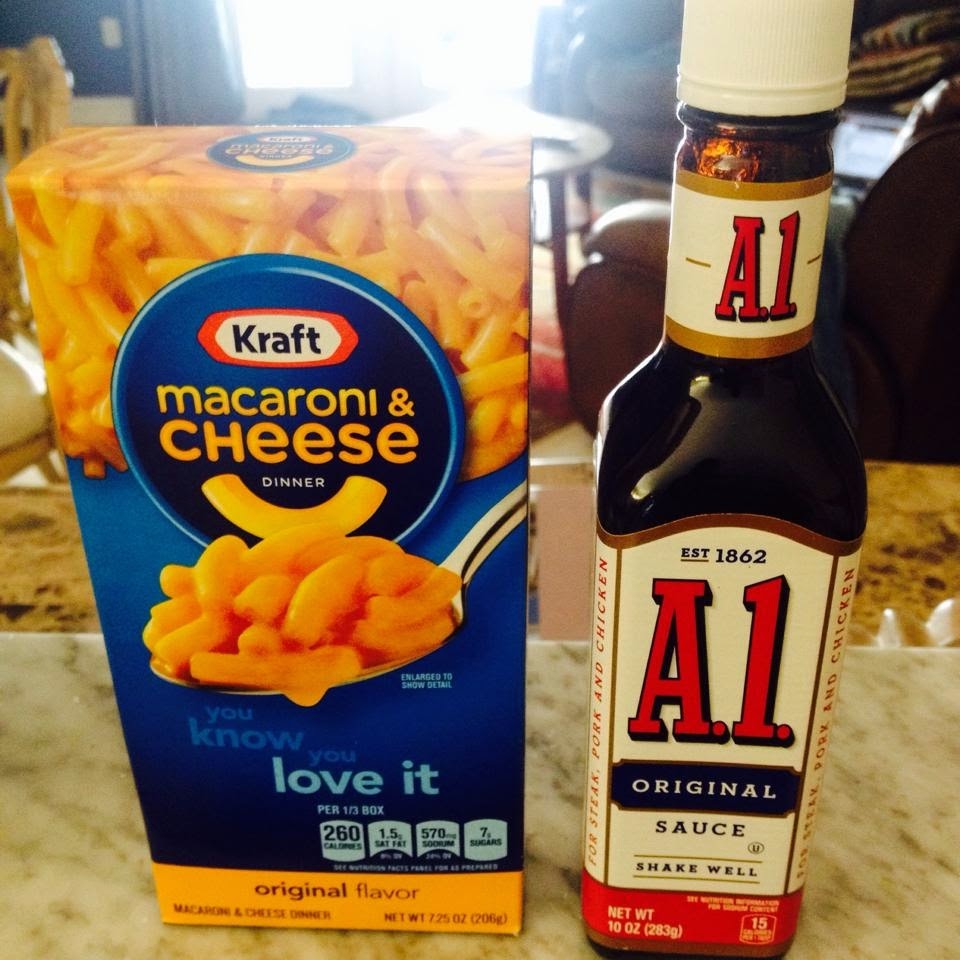 After he went to store to buy the ingredients (the recipe clearly states that the husband has to do all of the prep work), Gary tuned in to the Philips Phile radio show which happened to be playing. Gary mentioned earlier on twitter that he was going to try the recipe. On the show, they sometimes do a shout out to twitter followers. While we were listening, they started talking about us trying the recipe. It was fun to hear.
If I do go into labor tonight, I promise to not try to try to tell every pregnant woman who's past their due date that they have to try this.
What crazy tips for inducing labor have you heard?
Update:
So, I did end up going into labor, but not 24 hours later like the recipe promised. Still, I did go into labor about 29 hours later. Am I convinced that the Surefire Labor Inducing Recipe did it?
Not really. We tried soooo many labor inducing tips and ideas that week that any of them could have done it, or it could have been that I was already 4 days past my due date and my body was just ready. But, if you're really desperate, it's worth a shot. :)
Posted by Rachael at 4:12 PM No comments:

It's Baby G's due date today!
We did our 39 week appointment yesterday even though it was only a day from hitting 40 weeks because our doctor was out last week since his wife just gave birth to their second child! He's an awesome doctor, so it was worth the wait.
I've shown some progress, but still not so much that it looks like I'll actually go into labor today. The doctor said he thinks there's about a 40% chance that I'll go into labor on my own before 41 weeks, though of course it's hard to predict. He did say I've made enough progress that if I were induced it wouldn't increase the risk of c-section.
I'm still hoping not to be induced, since I'd rather avoid being given Pitocin, but after talking it over with the doctor Gary and I decided to go ahead and schedule an induction for Monday (the day before I would hit 41 weeks). Our doctor will be at the hospital that day, and as much as we want things to progress naturally, we don't want to wait much longer than 41 weeks due to the possible risks for the baby as you get closer to 42 weeks and because the longer it takes for her to get here, the less time Gary will have with her before he goes back to work near the end of April. Also, my dad, who lives 6+ hours away, now knows that he can plan on coming to town this weekend to meet his first granddaughter at the start of next week if she's not here before then.
It's also nice that after all of the "When will she get here?" of the last few days we know that at this time next week, she'll be here.
In the meantime, I'll be using my exercise ball, going on walks with Gary, and praying that she comes any day! 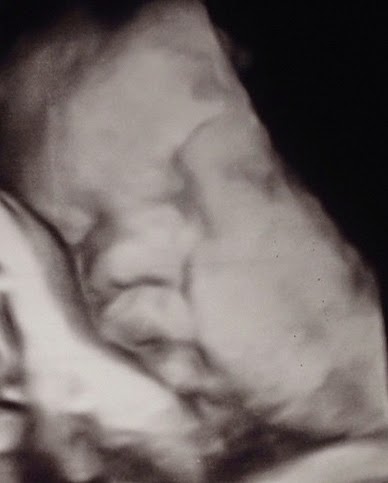 She loves putting her hand over her face. 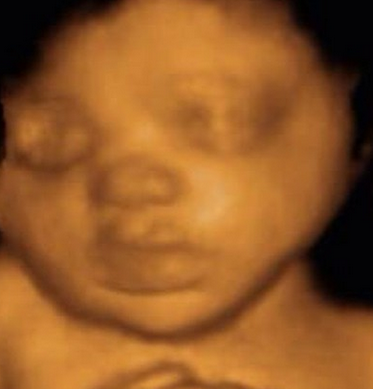 Posted by Rachael at 6:49 PM No comments:

We have two amazing dogs, a four year old bulloxer (boxer/American bulldog mix) and a 1 year old that we think may be a cross between a ridgeback and a whippet. They’re both rescues, so it’s anyone’s guess.

One of their favorite things to do together is to run laps around the back yard, tackling each other, and rolling around together. 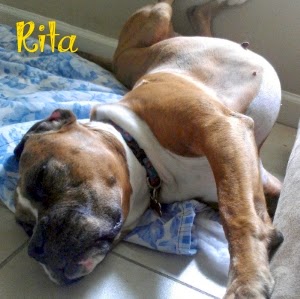 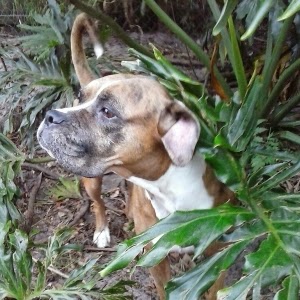 Rita is also a fan of lizard hunting, and occasionally digging holes, which she knows is a no-no. 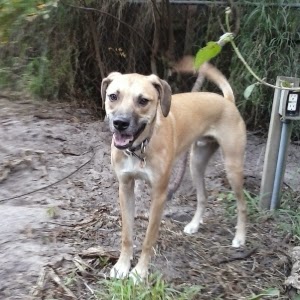 And Hayworth seems to love finding the sunniest patch of dirt in the yard to lay in.
Which of course results in some very dirty dogs. Gary gave them a bath a few days ago in preparation of Baby G’s arrival since we knew it may be a while before we felt we had time to bathe either of them again. We managed to keep them in the house the rest of the night.
But of course the next day: 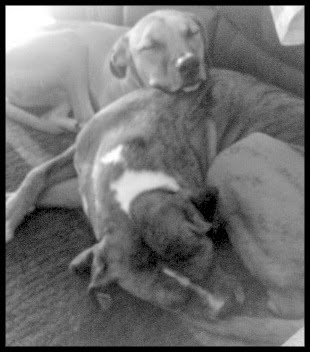 Posted by Rachael at 8:39 PM No comments:

So Close, and Happy Easter!

When Will It Be?

Just 2 days from our due date, and we can't wait to meet baby G. Will she be late, early (though she'll have to come pretty soon if so), or right on her due date? Gary is predicting that she'll come one day late, on Wednesday.
It certainly seems like time has slowed down as we approach her arrival. Now that we're so close, the anticipation makes each day that we go without meeting her seem that much longer.
It's so exciting to think that next Easter we'll have a precious little girl to celebrate with.

I love the quote from Ravi Zacharias in his book The Grand Weaver:
""Jesus does not offer to make bad people good but to make dead people alive."
And that's exactly what Jesus accomplished for us. He suffered and died, but was raise again for us. Not just to make us "good enough", but to bring us to true life.
Click here to read the account of Jesus after the crucifixion in Matthew.
Happy Easter!
Posted by Rachael at 4:47 PM No comments:

We're just 4 days from our due date, so it's anyone guess when baby G will get here. Will she be early, or late or come right on her due date? Both of my parents called me yesterday within minutes of each other to just check in and see how things were going. My answer was, I'm still feeling good (I've been so blessed this pregnancy) and there's still no way of knowing when she's coming.
I'm finding that late pregnancy is a lot like early pregnancy. Before we took our first pregnancy test, I was constantly considering the early pregnancy symptoms I may or may not be feeling. The problem was, so many of the symptoms of early pregnancy mirror PMS. There was the back and forth of "Well, I could be pregnant, but it could just be...”
Now, the thought is "Well, it could be early labor, or it could just be..." Everyone's heard of someone, or knows someone who's had a false alarm. Living 45 minutes from the hospital, we really don't want to drive all the way there just to get sent home. At the same time, I really don't want to spend 45 minutes in the car in the middle of painful contractions. Still, since it's my first pregnancy, the doctor is in no hurry for me to rush in since labor usually takes a while for first time moms.
Last night was my first "Could it be labor?" experience. I've had lots of Braxton Hicks contractions in the third trimester especially. Some seem to last forever, but they've never been painful. Just the intense tightening sensation.
Late last night, right before I usually would have been heading to bed, I started feeling uncomfortable. I'd had trouble sleeping the night before, but otherwise felt okay yesterday. Then, I started feeling some pain with the Braxton Hicks contractions, but was convinced it was just a result of the massive amount of candy I'd eaten. (Okay, not massive, but more than I usually eat)
Gary was convinced it could be the start of labor, while I told him no, it was just the candy. But, I kept getting more and more uncomfortable, and the pain eventually started to go into my back as well. Still, it wasn't unbearable, and hard to time with consistency, though it was happening often. After reading tons of "What did labor feel like for you?" pregnancy posts and seeing that it is completely different for everyone and basically if your water doesn't break (which despite what movies would have you believe only happens in a tiny percentage of pregnancies before active labor), it could or couldn't be labor.
When Gary came to bed, I decided that if this was it I should get sleep while I could, though I didn't know if it would be possible. But, I did manage to fall asleep and slept most of the night. I woke up to another painful Braxton Hicks contraction and decided to get up and take a shower. I felt nauseous, but after a long shower, I didn't feel any more pain. It's now been over an hour and nothing. So, it looks like baby girl is still hanging in there for now.

Posted by Rachael at 8:29 AM No comments:

Rachael
Welcome to Promisingly Penny-wise! I'm Rachael, a wife and brand new mother making the transition from full time teacher to stay at home mom and homemaker. I love simple, healthy and affordable recipes, crafts, DIY projects and saving money. Follow along on my journey to becoming promisingly penny-wise!